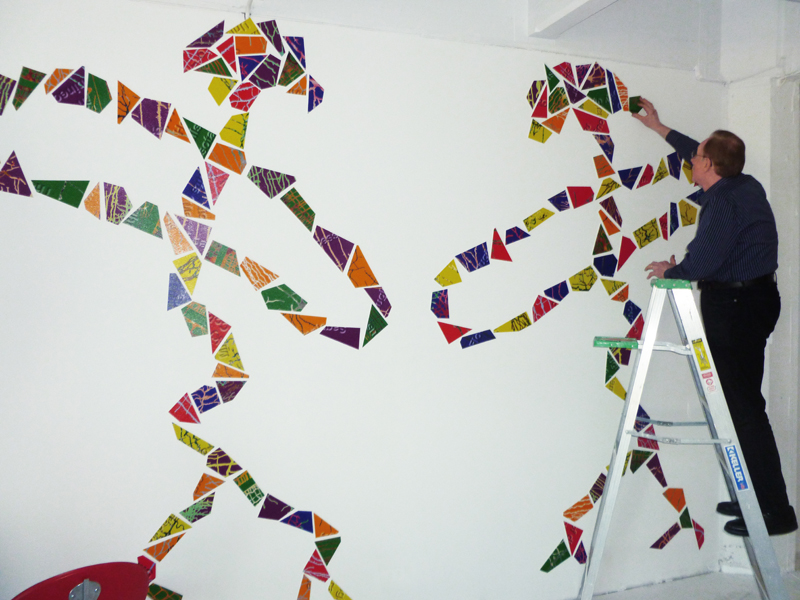 Alvydas Pakarklis invited me along with other artists to participate in a flash art exhibit, at the studios of Tauras Bublys. The title of the exhibit is Reflections from the Bottom of a Well. I used my thought fragments to create the site-specific installation piece, Mirror Neurons.

Mirror neurons were first discovered by Italian neurophysiologists in the 1980′s. In studying the movement controlling neurons, in the cerebral cortex of monkeys, they found neurons that participated in active movements, such as reaching for an object. They also responded, in a similar electrophysiologic fashion, to monkeys seeing that same movement performed by another. This confirmed observation in animals and in humans, led to the concept that mirror neurons are responsible for us having empathy for others. If our neurons respond to our own activities, and similarly respond to activities we see performed by others, the network instantly produces empathic understanding. Thus, empathy emerges from networks of these mirror neurons. The “Theory of Mind” arose from these concepts. In clinical neurology, there are many theorists who feel that a deficiency in the functioning of mirror neurons may be a cause of autism. This link to autism is very speculative, but worthy of serious attention.