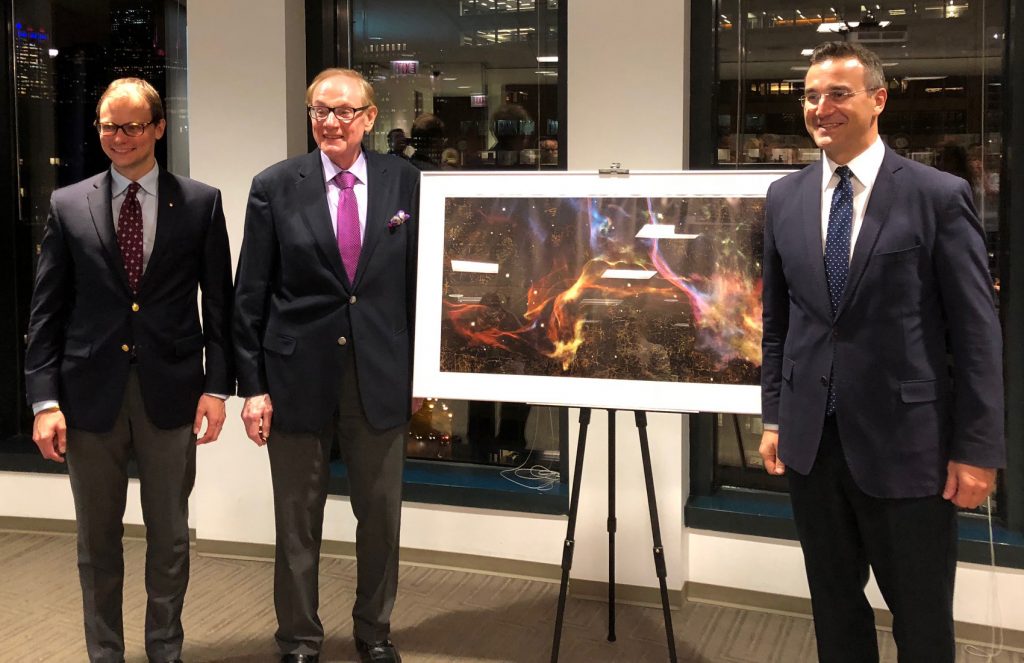 Mantvydas Bekesius, Consul General of Lithuania, myself, and Umut Acar, Consul General of Turkey, next to Veil during the opening of the art exhibit Cosmic Consciousness at the Turkish consulate in downtown Chicago. I donated this piece, Veil, to the people of Turkey and it will be displayed indefinitely at the Consulate.

I was honored to be invited by Mr. Umut Acar to exhibit Cosmic Consciousness at the Turkish consulate. We had met at lectures that he organized about Turkey’s archeology at the University of Chicago’s Oriental Institute. My own artistic interests overlapped closely with his own and thus the concept for this exhibit arose. The two original pieces in the Cosmic Consciousness series, Veil and Cassiopeia, are extremely large, 10 x 20 feet (owned by the Oriental Institute), and thus could not be shown. Thus, smaller versions were exhibited. Also, several hundred of the underlying photographs were shown making for a very impressive artistic visual display—overlooking the skyscrapers of downtown Chicago.

During the opening reception I gave a PowerPoint presentation explaining the genesis of this series. The motivation for extensively exploring central Turkey to photograph Hittite archeological sites, was a theory proposed by Dr. Jonas Basanavicius (1851-1927). Besides being a physician and the founding father of the republic of Lithuania (Mr. Acar was correct in considering him to be the George Washington of Lithuania), he was an avid archeologist. He theorized that when the Hittite empire collapsed in the 13th century BC, a segment of the Hittites, along with Phrygians and Thracians, migrated north and settled in Lithuania. Thus, the ancient origins of Lithuania may have been in central Turkey. I discussed the pros and cons of this theory. In summary, this is a valid possibility that should be investigated further.

Background information about these two works can be found in the art gallery section of this website.