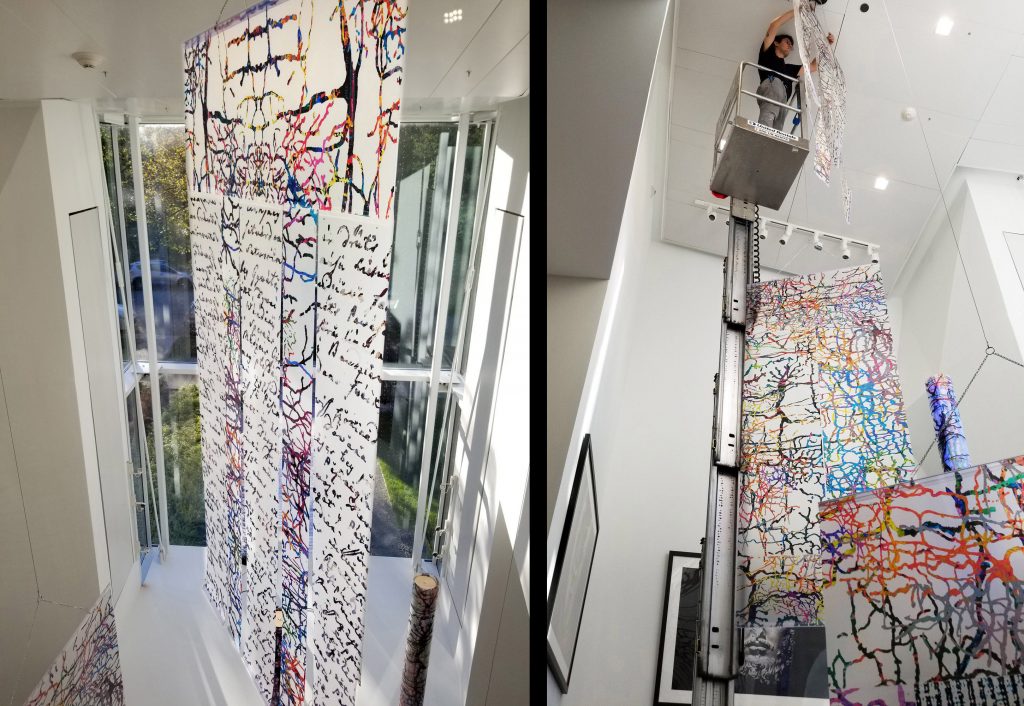 Donelaitis (from the Whirling Memories series) 8 x 4 feet in size, rotating at 3 rpm. On display at the University of Chicago’s Institute on the Formation of Knowledge, 5737 S. University Ave., Chicago, as part of my Cycles of Memory art installation.The media is semitransparent, so that Donelaits’ words can be read from one side or, in reverse order, from the other. On the right, Matt Brett is installing the piece. This exhibit will continue into the Spring of 2019.

We installed a very complex art exhibit at the University of Chicago’s Institute on the Formation of Knowledge. The piece which was placed high above all the others deals with the writings of Kristijonas Donelaitis (1714-1780). He was a Lutheran priest and the author of the first literary work in the Lithuanian language, The Seasons.  Donelaitis’ hand written words are included in this piece. This piece celebrates the 100 year anniversary of the independence of Lithuania which was declared on February 16, 1918.

The Seasons is a very lengthy poem written in four sections, each dealing with one of the seasons. One unique aspect of this work is that it describes, in very moving detail, the daily lives of common farm people—Lithuania’s serfs. Serfdom, an existence that is just a scratch above slavery, was still in practice throughout most of Lithuania at that time.

The images underlying the lettering of Donelaitis’ words are photographs that I took in central Turkey. These are archeological sites of the Hittites and of the oldest known city, Chatal Hoyuk. Dr. Jonas Basanavicius, the father of Lithuania’s independence, proposed that the origin of Lithuanians was related to a migration that took place from this area, directly north, after the fall of the Hittite empire around 1200 BC.

As part of the Cycles of Memory art installation, this piece repeatedly cycles back, over periods of hundreds of years, to the origin of a country, it’s literature, and it’s culture.

Below are a some of the photographs from central Turkey of the Hittite archaeological sites that I photographed.