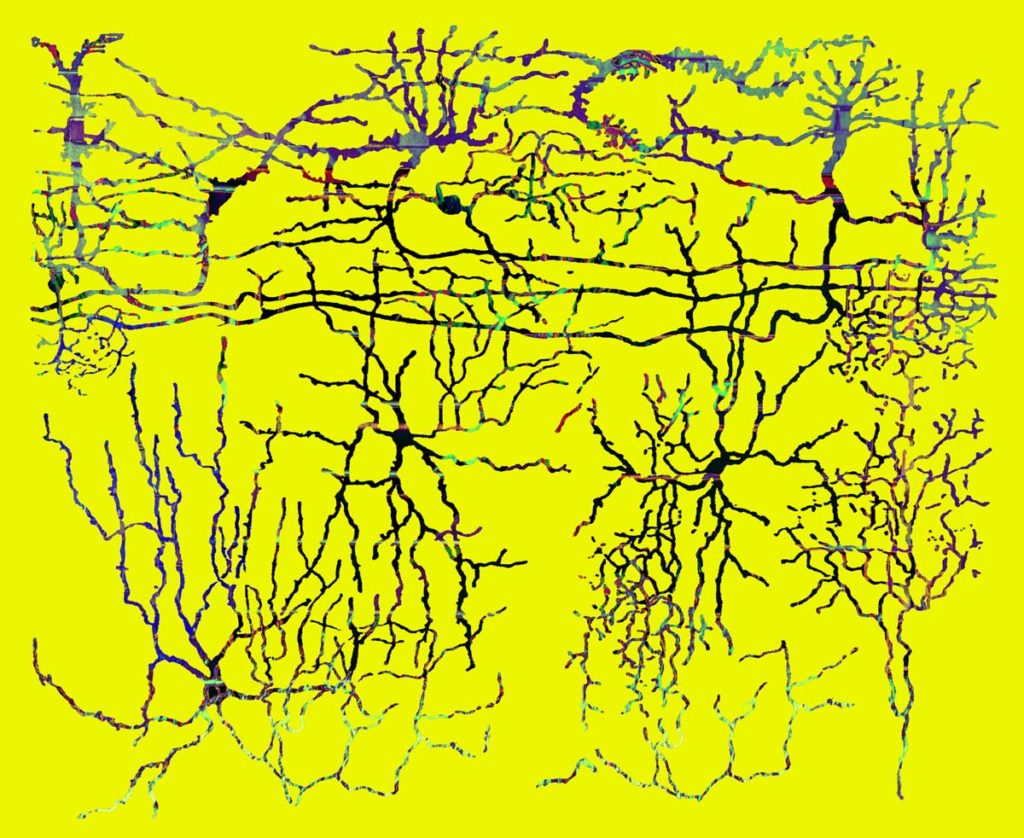 In the spring of 1996, I was exercising in the basement on my stationary bicycle. I had a knee injury which prohibited other types of physical sport activities. Taking care of the kids in the evenings provided me opportunities of a limited nature for sports. One evening as I was pedaling the bicycle, I was looking around the room and was reading some of the things written on the different items in the basement. I noticed that it was not possible for me to read a portion of a word. Also, I noticed in my left visual field a peculiar type of a zig-zaggy disturbance. It wasn’t very prominent, but in this general area where the visual disturbance took place, I was not able to read. However, looking around the room I was able to see everything and there was no sense at all of visual loss or any other disturbance. It took me quite a bit of effort to realize what was taking place and from my knowledge in neurology I realized that I was experiencing a migraine aura. Over the next fifteen minutes the area of involvement gradually increased and then over the subsequent five or ten minutes it completely returned back to normal. The entire episode lasted twenty-five minutes. Of note was the fact that there was no appreciation that I had that anything was wrong. It was only when I specifically tried to read words that I noticed that I couldn’t read them. By moving my eyes around and concentrating on what I should be seeing that I realized that I had developed a deficit in my vision.

The problem of visual field disturbances and visual losses that accompany migraine are well known clinical phenomena. Also, the fact that individuals can have these kinds of deficits and not be aware of them is also well-known and described in neurology textbooks. Similar kinds of phenomena with visual disturbance can take place in individuals who have had strokes or loss of the blood supply to a portion of the brain. When the portion of the brain in the occipital area of the brain is damaged, a visual field loss can occur and often times individuals will not be aware of the deficit until formal testing takes place.

This phenomenon indicates that the consciousness of the visual world can be disturbed without any awareness of any changes. The nervous system itself adapts and the deficit that has developed is ignored. The conscious world still continues to exist although in a modified form.

I have seen many patients who have had strokes that affect the language center who develop what is called fluent aphasia. They speak in language where the syntax is incomprehensible. When spoken to they will appear to understand what you are saying, but from their responses it is very clear that they had neither understanding of what was said to the,m nor do they have any understanding of what they are saying. Often times these individuals will have no comprehension that they have developed a severe language disturbance.

Neglect phenomenon can also occur. These are particularly evident in areas of damage to the parietal lobes of the brain. Individuals can develop very specific defects such as not being able to calculate numbers, not being able to recognize their fingers, amongst other problems. Sometimes, when cortical lesions are large, particularly when they involve the parietal areas, the patient can develop total neglect phenomenon. I have frequently seen patients who have a massive stroke who are completely paralyzed on one side of the body and who are totally unaware of the problem. That portion of the world that their now function-less body assumed is no longer in existence. When the paralyzed extremity is brought to their attention, so that they can see it, often times they will deny that this is their arm and insist that this is somebody else’s.

All of these examples indicate that consciousness itself arises from the lateral connectivity of areas of the cerebral cortex. The cerebral cortex itself is extremely intensely cross-circuited through many different pathways, including thalamo-cortical ones. After focal deficits and focal losses occur, the sense of consciousness continues through the lateral connectivity of the remaining intact cortical areas and produces the sense of intact conscious experience. The deficit that has occurred disappears from the conscious experience.

Current comment:  A few days ago, entirely by accident, I came across this 1998 manuscript that I had started to write. I never finished it, and had totally forgotten about it. Given that I have been investigating the quantum nature of consciousness, this discovery cannot be serendipity. As I have always said, coincidences do not happen. // The art work above is “Recollections of Refuge”. This is a painting, 5 x 6 feet, on canvas. It has been purchased by a neighbor of mine. The underlying image deals with a photograph of Drexel Home for the Aged, near the University of Chicago campus. I lived in a basement room and received meals and a small stipend. In return, I provided call coverage for any medical emergencies that took place during the night or on weekends. I was a medical student at U of C at the time. This building was a place of refuge that allowed me to escape.

This entry was posted in Neoconceptual Art, Uncategorized.