The Hope and Spirit series was dedicated to the millions of victims of Soviet atrocities, of all nationalities, religions, and races, who suffered two indignities: the brutality of genocide, and the injustice of the subsequent denial of their suffering and victimization. 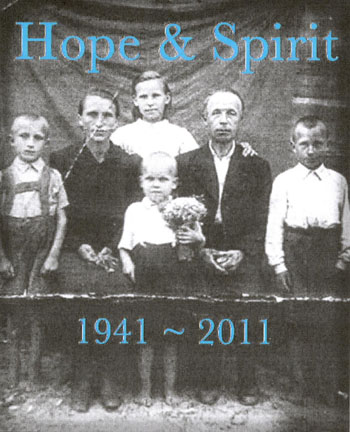 Historians estimate that as many as 20 million people across Europe were killed by Stalin’s genocidal machine. Those who survived deportations and life in Gulags, did so due to the strength of their spirit, the force of their will, and endless hope. Thus, the program title was Hope and Spirit, a celebration of the human spirit.

I organized an extensive program of art and photography exhibits, film screenings, book signings, poetry readings, lectures, and exhibits of original historical materials. If we forget history, it will repeat itself. The Hope and Spirit series took place at the Balzekas Museum of Lithuanian Culture in Chicago, Illinois, from June 2011 through April 2012. Parts of the exhibit, photographs by Juozas Kazlauskas, photographs by Misija Sibiras 2010, and Chronicles of Violence continue to be on display on a permanent basis.